“Casey Anthony, currently spending her last few days in jail after being found not guilty of the murder of her 2 year old daughter Caylee, has refused a visit from her mother. 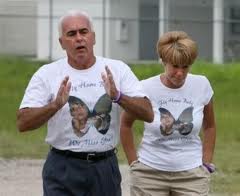 Jail records show that Cindy Anthony requested a video visit with her daughter, which was declined. However, Casey Anthony did accept two other visitors, a member of her defense team, and Jose Baez, her lead defense attorney.

“”This morning under policy, Casey was told of the visit and she has declined the visit so it will not occur,”” said jail spokesman Allen Moore.

Even though Cindy Anthony and her husband George regularly attended their daughter’s trial, she had cut off communication with them.

Anthony will walk out of jail on July 17. Even though she was sentenced to the maximum of four years for lying to police, she received credit for time already spent in jail, and good behavior.”