“It was the day that Casey Anthony expected to walk free from prison. But her upbeat manner soon turned sour when the judge decided that she would be getting her freedom just yet. 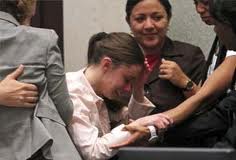 After being found not guilty of the murder of her daughter Caylee, she was back in court to hear her sentence for the four counts of lying to police. Each conviction came with a maximum sentence of one year in jail, and Judge Belvin Perry sentenced her to just that – one year for each conviction. Despite the defense’s request that Anthony serve them concurrently, which would have resulted in her immediate release, he ordered that they be served consecutively, equalling four years in jail.

After calculating time already spent in jail, and credit for good behavior, it was originally announced that Casey Anthony would walk free six days later. Upon further calculation, Orange County corrections officials revised this after they had “”conducted a detailed recalculation of the projected release date”” and she would remain behind bars until July 17th.

This did little to appease the angry crowds who had gathered outside the courthouse. Protesters shouted “”Justice for Caylee”” and held signs saying “”Arrest the Jury”” and “”Jurors 1-12 Guilty of Murder””. There was an increased police presence to ensure that the protests remained peaceful.

The anger was not limited to outside the courthouse, with people turing to social media networks to express their disgust and anger. The “”I hate Casey Anthony”” page on Facebook was ‘liked’ by nearly 22,000 people. Comments on the page included people wishing her the same fate as Caylee.

At a separate hearing on Thursday, Judge Perry stated that he would be holding off on releasing the names of the jurors out of concern for their safety, even though the Associated Press and other news organizations have requested their release.

Most jurors have not spoken to the press about their verdict, though one spoke to ABC. “”I did not say she was innocent. I just said there was not enough evidence. If you cannot prove what the crime was, you cannot determine what the punishment should be.”” said Jennifer Ford, a 32 year old nursing student.

“”It’s no big secret that some people disagree with their verdict, and some people would like to take something out on them,”” said Perry. “”I doubt you would have this same uproar if the decision would have been different. But juries aren’t supposed to make decisions based on public opinion polls”” he added.

Anthony will be released nearly three years after her daughter was first reported missing. The lies that Casey told following the initial report are what led to her conviction. She lied about leaving Caylee with a nanny called ‘Zanny’, who didn’t exist. She lied about where she worked, claiming she had a job at Universal Studios theme park. She told two friends that her daughter had been the victim of a kidnapping, and that she had received a phone call from her.

The defense argued that the little girl had drowned in the family pool a month earlier, and that Casey’s father, George, had helped to cover it up, by making it look like a homicide and dumping her body nearby. It was also stated that Casey was a victim of sexual abuse at the hands of her father. George, a former police officer, has denied any of these claims.

The prosecution, led by Jeff Ashton, alleged that Anthony murdered her daughter by suffocating her with duct tape, due to the fact that the toddler interfered with her partying lifestyle.

The area surrounding the Anthony household, and the site where Caylee’s body was found has increased police presence. Deputies are patrolling the area, and no-parking signs have been erected so crowds are unable to block the roadway. It is not known whether Anthony will return to the family home when she is released next Sunday.”